Bike Friendly Kalamazoo’s volunteer participants began work on mapping one of the largest transportation and destination-oriented bikeways in the nation in 2012.  Over time the network has been named and is being signed as the Southwest Michigan Bikeway (SWMB), little by little.  The SWMB includes approximately 380 centerline miles of bike routes that connect all the named municipalities and institutions of higher learning within the Kalamazoo Area Transportation Study’s metropolitan planning organization.  Click here for list of destinations connected in the plan. 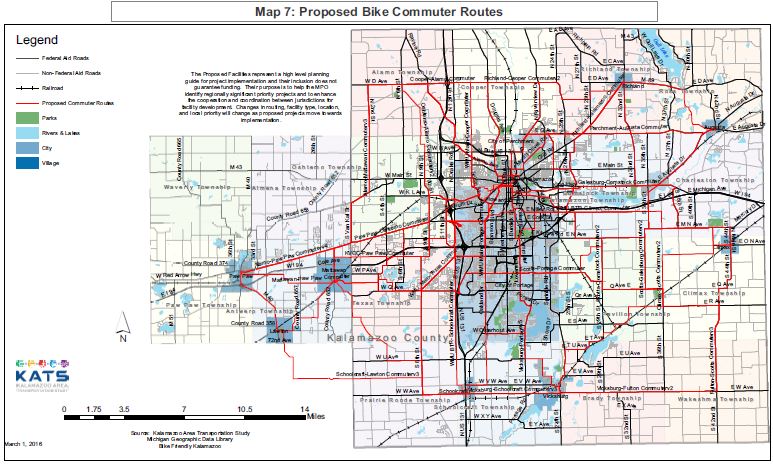 This page is a step toward assembling the many resources that describe the SWMB, as Bike Friendly Kalamazoo’s contribution to the greater community and building on the work of the Kalamazoo Region Bike Route Committee.  To reduce the time it takes to update links on our web site, over time we will be moving items from other pages on our website that duplicate this information onto this page.  Due to the November 17, 2021 adoption of the 2050 KATS Metropolitan Plan, items on this page that are slightly outdated are scheduled for revision in 2022.

About The Southwest Michigan Bikeway  (one page overview)

Public Route Development Process  (for developing the original route network between 2012 and the end of 2015; describes systematic and repeatable community engagement and participation)

Southwest Michigan Bikeway Implementation Plan (Most recent draft version available from the Kalamazoo Region Bike Route Committee.  Southwest Michigan Bikeway is another name for the regional route network being signed as such.  Maps of the network were first proposed as “Map 7” or “Bike Commuter Routes” in the KATS 2045 Transportation Plan.  The “Bike Commuter Route”  nomenclature are now referred to as “Regional Bike Routes” in the more recently adopted KATS 2050 Metropolitan Transportation Plan.

Southwest Michigan Bikeway Sign Guidelines (Recommended by the Kalamazoo Region Bike Route Committee, January 29, 2018; Destination-Direction-Distance, the so-called D1-Series wayfinding have been supplemented in 2022 and may be found in the latest version of the Implementation Plan.)

Commuter Bike Route Network (Proposed) “Map 7” (final PDF map image of “Map 7” on page 148 of the KATS 2045 Metropolitan Transportation Plan.  The route map has been adopted as “proposed.” Jurisdictions/agencies may use it as a guide to further implementation, knowing it has been vetted by KATS’ staff and its Technical and Policy Committees, after being developed by key community stakeholders in a process documented here.)  “Map 7” is now being called the Southwest Michigan Bikeway; plans for its implementation are being prepared (see above).

Regional Bike Route Network (existing and proposed) (The figure below is a static snapshot taken on July 5, 2022 of interactive map found on KATS website here)  See KATS 2050 Metropolitan Transportation Plan, approved November 17, 2021.  KATS intends to keep the interactive map non-motorized map as current as possible, possibly on a quarterly basis, in order to facilitate incorporation in subsequent versions of their Metropolitan Transportation Plans.

Commuter Bike Route Network (Proposed): RWGPS Route List  (Ride With GPS web site of final set of individual routes that make up “Map 7” as vetted and narrowed down from the catalog of hundreds of BFK Commuter Route alternatives.  Routes can be downloaded for further analysis.  Comments contain name of route designer and other useful information.)

Southwest Michigan Bikeway – Google Maps (interactive Google Maps version of routes adopted as “Map 7” proposed inter-community routing in the KATS 2045 Metropolitan Transportation Plan; many useful features: clicking on a route highlights the route and pulls up the route name; routes can be selected from a route list; more)

Southwest Michigan Bikeway (Proposed): RWGPS Route List  (Ride With GPS web site of individual routes that KATS used to make up the Southwest Michgan Bikeway – aka, KATS Map 7).  Hundreds of BFK Commuter Route alternatives were reviewed, vetted, and narrowed down to make up this final list.  Routes can be downloaded for further analysis.  Comments contain name of route designer and other useful information.)

Comstock Township Resolution in Support of Non-Motorized Plan  Adopted April 3, 2017.  Resolution to incorporate the Non-Motorized Element of the KATS 2045 Metropolitan Transportation Plan into local non-motorized plans.  The resolution encourages other jurisdiction within the KATS MPO to do likewise.